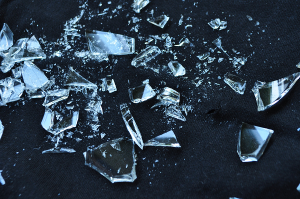 My husband and I are planting a new lawn on our five acres. He has worked for weeks preparing the soil, where once nothing but weeds have grown for the last three decades we’ve lived here, and for decades before that. It’s a sizeable chunk of dirt, 100′ x 75′. When finished, there will be enough lawn to erect a volleyball net, or even play a game of midget soccer.

We’ve found some interesting shards of the past in and under that dirt. Coiled and rusted fragments of bed springs, parts of foundation supports, pieces of old tools, roots of long-dead trees now faded into oblivion, along with some items we can’t identify. We’ve filled multiple buckets with the history of our piece of land.

We’ve thrown those rocks atop a nearby depression in the ground, the final resting place of three dogs we’ve owned.

The most interesting to me are the hundreds of pieces of broken glass we’ve scavenged out of the dirt. Most are tiny and jagged, barely noticeable. Some are larger, and we’ve surmised from the shapes that they could be parts of cups, plates, or even windows. We’ve guessed that perhaps the property owners from bygone days used the area as a personal landfill. Every time my husband drags the harrow around the dirt with his tractor, more glass emerges.

The easiest way to see the glass is to stand on the edge of the plot of dirt when the sun is bright overhead. Light glints from almost every square inch. Winking in the sunlight, the area looks like a small city at twilight, the downtown lights shining to light the way for folks going out on the town for the evening.

Jesus calls His followers to be “the light of the world”. Thinking about that, standing on the edge of our patch of dirt, it occurred to me that if I could somehow reconstruct the hundreds of glass shards into their original forms…cups, plates, bowls, windows…and see them as they were, the reflected light wouldn’t look the same, nor would it be as effective. The unbroken glass would be useless to shine the light into every inch and corner of the dirt-filled space.

The glass must be broken and scattered in order to shed light on the entire tract of dirt.

As lights for Jesus in this dark and dirty world, we must be broken and scattered. Only then can we be effective. Only then can every square inch of our world be exposed to the Light.

Don’t be afraid to let Him break you. Only then can new life spring from the dirt.