When I was five and my sister was two, she slipped on the ice in our driveway and hit her head. Dad carried her into the house and laid her on the couch, my older brother and I looking on. We thought she was dead. But it wasn’t long before my parents roused her, and my brother and I went back outside to throw snowballs at each other.

The hotel restaurant is busy. Men in business suits talked in whispers, eyeing each other like so many sharks and prey. Women laughed gaily and sipped wine, shopping bags spread around them. Wait staff glided anonymously between tables, coffee pots and trays perched precariously. Hushed voices spilled family secrets and the latest work gossip.

The tables are stylishly set in this upscale Bellevue, WA eatery. White tablecloths, gleaming silver and glassware, soft green napkins. A small spray of red and yellow dried flowers in the center of each table lent an air of elegance to the room. It’s a place where successful people pause to talk about their success—in business, or shopping for the perfect dress for the upcoming company dinner.

I see her there now. Her name is Holly.

Long fingers, longer than mine, wrapped around the white coffee cup, a cloud of steam rising. Chestnut hair pulled back from her forehead by a colorful headband, then flowing over her shoulders like a cascading waterfall. Intense hazel eyes stared out the window at cars coming and going—looking for one in particular—then back down to her hands, tight around the cup.

She doesn’t quite fit in with her surroundings—something is off. But her clothes are as impeccable as ever. Black turtleneck sweater under brown leather jacket, slim jeans, ankle boots. Thin gold bracelet and matching necklace and earrings. She always knew how to dress.

She shifts in her seat to look at the entrance, presided over by a black-tied concierge. Glances quickly around the room at each occupied table. She waves an approaching waitress away. Then gazes out the window again. Looks at her watch. I see the delicate hands from where I stand just over her right shoulder—she arrived at noon—and it’s now 3:30PM.

She looks up when the front door opens again. Her eyes shine in anticipation. When the elderly couple shuffles in and is greeted by the concierge, she sags back in her chair, the light fading from her eyes.

I move closer to her. I have to see her face more clearly. I step to the table next to her—unoccupied—and sit, the heavy linen tablecloth brushing my knees as I sit facing her. She doesn’t see me, but now I’m close enough to see the unshed tears in her eyes. I reach out as if to touch her cheek, to comfort her, but I’m too far away from her. I hold my hand out, suspended for a moment, then let it drop back to my lap.

Because I’m not sitting in that restaurant at the table next to her.

We had agreed to meet that day, Holly and I—my only sister—but I forgot. Forgot about the arrangements we’d made to have coffee after my work conference was over, before I drove back home to Yakima. She lived in Monroe, WA with her husband and two young boys. We hadn’t seen each other for several months, since Christmas, and she’d asked if we could meet when she found out I’d be in Bellevue that February, in 1989.

I’m not sitting near her in that restaurant because I forgot.

The phone rang at dinnertime after I arrived home.

She said, “Where were you? I waited for hours.”

I was aghast at myself for not remembering our date. I apologized profusely. She said it was okay, she understood. She always understood. We talked a few minutes more. I asked her if there was something in particular she’d wanted to talk to me about. She said, “No, nothing special. Just family stuff, just to catch up.”

The conversation ended when I said, “Well, gotta get dinner. We’ll talk soon.” We said goodbye.

That goodbye was the longest ever.

A month later, my beautiful little sister—my only one—took her own life. She was thirty-two.

When I was five, I thought she was dead. Now, at thirty-five, I couldn’t believe she was. That I’d never see her face again or the graceful way she moved. Hear her infectious laughter. I couldn’t believe that my lame apology was almost the last thing she’d heard me say.

The days after are a blur to me. People came and went like actors on a stage, saying how beautiful she was, a great mother, an amazing person. They came and went through the hole in my heart.

And now another thirty-one years have gone by since that day, the 25th, in March 1989. And each year I come to this month asking myself what if?

What if I’d shown up?

Maybe she would be here, watching her grandchildren grow up—and mine.

If I’d shown up, would I have been able to make a difference? Perhaps.

I don’t really think I’m so important or wise that I could have made a difference.

I felt like—still feel like—an accomplice in her death. I manage to talk myself out of those feelings most of the time, but they still have the power to squeeze the breath out of me.

I write this because I’m still learning to just show up. 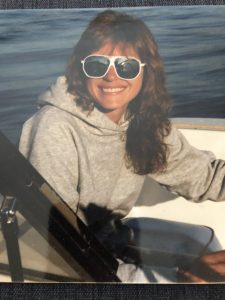 We never know when we’re having the last conversation with someone we love.

6 responses to “Just Show Up”