Sunshine Under My Hat

The Story of a Mom

There’s never been a human or animal or insect or fish who has entered earth’s atmosphere without a mother.

Say what you will about Mom, we all have one.

Sometimes the mother we claim isn’t the one who gave birth to us, but there was still an umbilical connection with a female for every person ever born . . . with one exception.

The first people, Adam and Eve, were hand-molded by God Himself.

What is it about mothers that delights us one moment, and torments us the next? I can only speak of my own experience.

My mother and father reared four children, losing two in adulthood. My younger sister and younger brother both died in the eighties. My older brother and I, and our father, are all who are left of our family of six.

Mom was a hard worker.

She didn’t finish school–many folks didn’t back in the forties and fifties–but received her GED, then graduated college in her fifties. It was a proud moment for the family. She worked at various jobs, ending her career working with our Dad in the fruit business.

Then there came a time when Mom began experiencing cognitive issues. She was eventually diagnosed with dementia, and my husband and I brought her to live with us in 2012. That lasted a year and a half, then we moved her to a care facility nearby.

Mom, in many ways, had a hard life–at least hard experiences, not the least of which was losing two adult children within five years of each other. That harshness changed her, and I believe, hastened the onset of her dementia. But, Mom was a confirmed optimist. She was never a doom and gloom woman, even when the day came that she no longer recognized me.

It was tough, for both Mom and us. Dementia is a hard disease to live with, and sometimes family relationships become strained. But there were bright moments, like the day she herself gave me the title for this blog post.

She was in the hospital. She experienced many hospital stays during her last four years. My husband and I were with her that day, and we had talked about how nice the weather was outside, and how it was too bad she was stuck in a hospital bed.

Mom glanced out the window and smiled. “Yes, it’s too bad. But I have sunshine under my hat.”

We laughed with her, and that moment became, for me, as sunshiny as the sky outside.

Moms have a way of saying sticky words, and hers that day stuck with me. I added Sunshine Under My Hat to my list of possible story titles, thinking I might use it some day.

I am so glad that my brother and I were able to spend the night in her room with her. The next morning we went to get coffee, were gone about fifteen minutes and when we returned, she’d walked out of that room into the Next.

Now, whenever I’m tempted to complain, to grouse about my circumstances, or to play the blame game, I remember Mom’s words.

No matter what’s happening in my life, I too have sunshine under my hat, tucked up there safely where no one can take it away from me.

I’ll see you later . . . I know you’ve already staked out a place for me next to you at the Table. 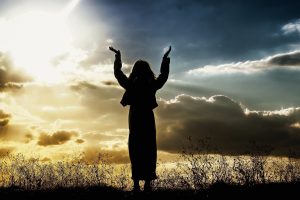 8 responses to “Sunshine Under My Hat”