That Day In Sewing Class

The lesson that just keeps on giving . . . 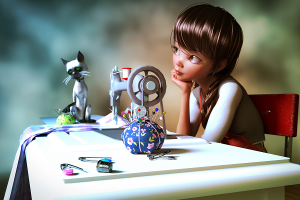 When I was in the eighth grade about a millennium ago, I took home economics. It wasn’t my choice. I’d rather have been in shop, but back in the ’60s, girls took home ec and boys took shop. I’d have done better to learn how to build a house, fix a car, or weld something.

I liked to cook. However, it didn’t take a Junior High teacher to show me how to turn on the stove and throw some ground beef in a skillet to make spaghetti. Mom taught me how to do that just fine, thank you very much.

I also excelled in the unit on How To Clean Your Bathroom. There were four kids in the house, and all of us were trained in Toilet Brush 101.

Then came one dark day when I looked ahead at the next unit we’d start after Christmas break. I blanched as white as the freshly fallen snow when I read the word Sewing.

I knew I was in trouble.

Mom was a fairly accomplished seamstress. She had one of those treadle machines, a big, clunky wood cabinet with an iron foot rest that moved up and down as she heel-toed through a sewing project. Much later, she upgraded to an electric machine.

Mom had given it her best effort over the years. She’d patiently tried to teach me, but I was an epic failure—I hated every minute of it.

So, of course, my projects were . . . let’s just say they’d never make a magazine cover. Eventually, she gave up trying to teach me and let me read instead. Which was fine with me.

I lay awake at night in the weeks leading up to the start of the sewing unit. I knew some of the other girls who would be taking the class with me. You know the ones. The girls who helped make posters for upcoming events, who decorated the gym for the sock hop, who submitted their art work to the fair. The artsy ones.

I wasn’t one of them.

The sewing unit began, and I suffered through it. Crooked seams and bloody finger tips from stabbing myself with scissors and needles, not to mention I became an expert at thread ripping and starting over.

. . . when the teacher, a short, gray-haired lady who handed out compliments sparingly, announced the end-of-the-unit project: we were each to make a dress. And, horror of horrors, we would have to model it before the class. To my ears, it sounded like I’d just been sentenced to eat lizards for the rest of my natural life.

But, Mom to the rescue!

She took me shopping to buy fabric and other supplies. She encouraged me, saying she knew I could do it, and that she’d be with me every step of the way.

Fast forward to the day I finished the dress and modeled it for my family. I’ll conveniently pass over what my two brothers had to say. They were…well, they were brothers. You get my drift. My little sister, who was about eleven at the time, watched me glide into the living room with something close to awe lighting her face. 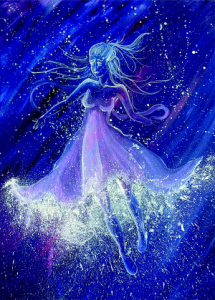 Mom and Dad said I looked like a princess. I was in heaven. I’d accomplished something. Something important in 1968. It was a rite of passage…making a dress for myself that made me look like a princess instead of an awkward, klutzy teen of fourteen who hadn’t had a boyfriend yet.

The next day in class, we all took turns changing into our creations and taking our seats. The teacher called us up one by one. I watched, nerves jangling, as my classmates were called forward to be critiqued. As each one stood in front of the class, the nausea in my gut rose to tidal wave proportions.

Then it was my turn.

My dress was a simple A-line, and fell just to the tops of my kneecaps. Sleeveless, no lace, ribbons, or fancy stitching. The material wasn’t expensive, a swirling blue and white pattern that did nothing to enhance my short, blocky figure.

Crimson-faced, I walked up the aisle and turned to face the class, peeking at the teacher’s face out of the corner of my eye. Her lips formed a thin, straight line, and her eyes raked me up and down. She reached and tugged at the waistline, ran a finger over a lumpy shoulder seam.

Then she smiled, waved a bony-fingered hand at me, and said . . .

“Class, let’s talk about how NOT to make a dress.”

I prayed the floor would open up under my feet. I don’t recall anything else she said, but I do remember the barely-suppressed giggles eddying around the room. My red face over the blue and white of the dress must have made me look like a Roman candle about to blow.

After she finished her verbal “F” in front of the class, I slunk to my desk in the back of the room and nursed the trauma, vowing never to sew again.

Words hurt. But, I bet you already knew that.

The fact that I still remember almost every detail of that one class on that one day reveals how much those words hurt.

I’d like to be able to say I learned a lesson that day, that I never, ever spoke hurtful words to anyone, but that’d be a lie. I have. To my siblings and children, to friends, to co-workers. Who knows what trauma I’ve caused with my own words? Perhaps someday there’ll be a reckoning.

Here’s what I think:

The words we speak to each other, particularly to those we love and who love us, color our lives with either love and joy, or heartache and regret. And those same words have the potential to make, or break, another precious soul.

Looking back more than five decades to that day in sewing class, I’m glad the hurt is gone, but the lesson remains.

4 responses to “That Day In Sewing Class”