Some lessons stay with us.

Prayer rooms come in all sizes and shapes. Some look like closets, or beautiful sanctuaries. They can look like a rocky mountain pathway, or smooth sand on an endless beach.

Or how about the inside of a car as it rushes along a busy freeway-or is stuck in traffic or stalled alongside the road?

And sometimes, prayer rooms are nowhere in particular, waiting for us just behind our eyelids.

Jonah’s, by any account, was one of the most unique prayer rooms ever devised by God. Jonah had spent days running from God and thought he’d escaped when he bought a ticket on a boat headed across the Mediterranean.

Little did he know that somewhere in the ocean deeps swam a great fish, recruited by its Creator to become a Jonah-shaped prayer room.

After being swallowed by the beast, Jonah eventually realized there is nowhere in the universe where God isn’t . . . even in the belly of a mammoth sea creature.

My prayer rooms have been quite diverse over my fifty plus years of walking with Jesus. For instance, there’s my office at home–and every other room in our house.

The fields and orchards which surround us give a good view of the distant hilltops . . . I’m often drawn to prayer when I see a snow-capped mountain in the distance. Praying outside is the best, I think. There’s something peaceful about praying on God-made dirt instead of a man-made floor.

But there have been other–harder–prayer rooms God has given me.

Sitting beside my six-week old son in the pediatric hospital, as he battled spinal meningitis.

The emergency room of the local hospital where we were informed of my younger brother’s death after a car crash.

My parents’ family room, five years later, as we listened to the agonizing news of my only sister’s suicide.

The grass in my yard, where I buried my face one moonlit night and gave up my decades-long rebellion against the Lover of my soul.

Mom’s room in the nursing home as my older brother and I watched her take her first breath in heaven.

The nursing home room where my Dad currently lives, his entire world now shrunk down to a bed and a sink.

What you-shaped prayer rooms have you been gifted with? 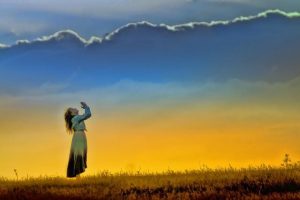 They aren’t just four walls, a floor, and a ceiling. The best are the ones God fashions with His fingers–the places He knows are best suited for us to discover His stupendous grace.

Those are the places where we can finally say, with Jonah, “I cried to the Lord in my great trouble, and he answered me. I called to you from the land of the dead, and Lord, you heard me!” Jonah 2:2 (NLT)

For another take on Jonah’s story, check out my book Leaving Your Lover on my Books page. His story is aptly called Swallowed.

2 responses to “The Prayer Room Redux”